The User as Hero

“Leaders must keep in mind that the customer is the superhero and your job is to tell them how your product will help them become a hero.” Donna Lichaw.

The history of product innovation has repeatedly shown that companies who ignore the user in favour of the technology fail. They fail because they fall victim to what is now known as the ‘stack fallacy’.

Slack, Uber, Facebook, Google, even Microsoft have proved Sharma right. Success in any given market always comes down to the same fundamental question, “Who understands the user better?”

Product managers have traditionally discussed products in terms of solving problems. But in a hyper-competitive world it’s no longer enough to simply solve a functional problem. You need to understand your user’s story.

Which is why it’s gratifying to read Clay Christensen’s recent book ‘Competing against Luck’ in which he revisits his theory of Jobs-to-be-Done (JTBD). Almost 20 years old, it’s the ‘newest old idea’ in product. Only now is it being fully appreciated by a new generation of digital product designers.

JTBD’s perennial relevance stems from its singular focus on the context, mindset and desired outcomes of the user, rather than the attributes of the product itself. It’s a form of storytelling, with the user at the centre of the narrative rather than a peripheral player. Product practitioners who embrace the method start by articulating a product’s ’Job Story’ before considering design details.

Christensen points out that companies that view their business through the Job lens are much less likely to be disrupted by upstart challengers, in the way hotels have been by AirBnB or taxis have been by Uber. Teenagers have always wanted to communicate with each other in private. Once they passed notes to each other in class, now they send messages via Snapchat.

The user’s Job Story rarely changes. It’s the means of achieving it that is dependent on the technology available.

Christensen is adamant that Job Stories are ‘discovered’ (rather than written) and that they have both functional and emotional components.

For a product designer, the Job lens shifts one’s focus away from features to the outcomes users can expect to achieve from using your product. It also transforms one’s understanding of the competitive landscape. Traditional marketers tend to focus on superficially similar products. As a consequence, product teams tended to compete solely on features or attributes: more memory, less sugar, a better camera.

Reed Hastings views Netflix through a Job lens. His understanding of where they compete is expansive:

“We compete with everything you do to relax. Think of any night you did not watch Netflix. We compete with drinking a bottle of wine. That’s a particularly tough one.”

Whale’s Justin Kan is more brutal in his assessment:

Stephen King once described a story as ‘a question, answered.’ A novel or film takes a hypothesis (“What if aliens landed in New York City?”) and presents one possible answer. Likewise, true innovators ask questions that no one else asks (“What if cars drove themselves?”) and build products by way of response.

Drawing on her background as a filmmaker, UX Designer Donna Lichaw encourages product developers to ‘storymap’ their products.

She prefers to call this ‘storymaking’ rather than storytelling.

She maps the user’s story against the classic ‘narrative arc’ of a novel or Hollywood film.

A standard narrative arc for a film would include the following steps:

In Donna’s methodology, the user’s story maps directly against the fictional narrative. For instance,

Donna emphasises that this is the opposite of a company telling its own ‘brand story.’ In this story, the user is at the centre, rather than the product or company.

Donna suggests each startup write 3 stories for their product: the concept story, the origin story and the usage story. And she’s kindly made templates for these available for free.

My own startup, Oolah, set out on a familiar trajectory. We had a Big Idea for a Big Market and immediately began sketching screens and calculating the cost of developing the MVP. Everyone got excited about working on the next Billion Dollar App. But as Oolah is a language-learning product for fashion students in China, and we’re in London, there were a lot of assumptions and unknowns given the distance between us and the user.

Workshopping Oolah’s Big Idea through Donna’s story templates forced the team to invest the time and effort to profile our ideal user and understand their desired outcome. It also helped identify gaps in our understanding that required further research. 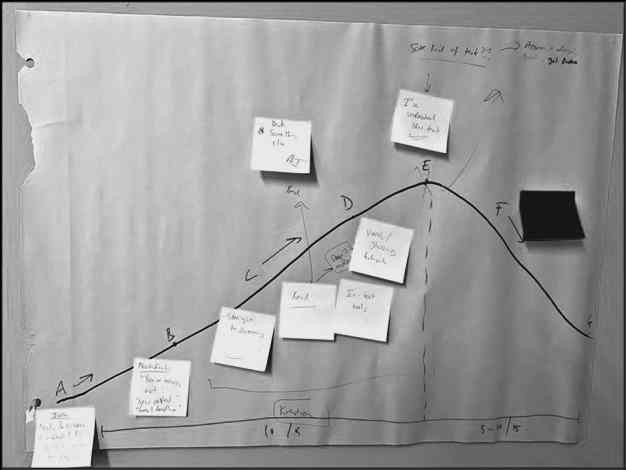 Donna’s background in film production comes as no surprise. Anyone who has worked in the space will notice parallels with storyboarding, an established technique for translating story into action before shooting begins.

The development of storyboarding is attributed to Walt Disney who pioneered the technique at his Animation Studios in the 1930s. Storyboarding graduated to live-action films in the early 1940s and became the standard medium for previsualization of films.

It was Walt Disney (again) who inspired the most famous instance of storyboarding in product design.

AirBnB realised they had a problem in 2011 when founder Brian Chesky developed a storyboard to capture the key ‘moments’ of the AirBnB customer experience after reading about Disney’s use of storyboards in the creation of Snow White.

Chessky and co. storyboarded the ultimate travel experience, realising in the process that their ‘real’ product was the trip itself (rather than just the room). They also realised that much of the customer journey occurs offline…out of their immediate control. 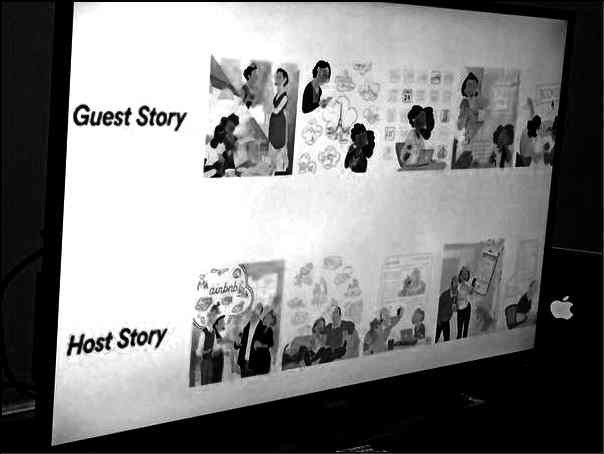 In response, Air BnB launched a number of initiatives including AirLove (to engage with and respond to feedback from hosts), Hospitality Labs (to explore and educate hosts about the nature of hospitality) and renewed investment in mobile (the main bridge between offline and online communications).

In uncovering their users’ story, AirBnb realised that long-term digital success is about relationships. And relationships are constituted not just through products, but through services coordinated by a team focused on their customer’s success.

Companies affected by stack fallacy tend to build solutions that look for problems. They build drills in search of holes. In the midst of the mania for AI, ML and neural networks, it’s important to remember that they are ‘just’ technologies. There is no human story yet. Which is why it’s important to start with a story. A story in which your user is the hero.