Product Value (and your Business Model)

Value is the new, new thing in product. As competition for user mindshare increases exponentially, laser-like clarity around the value your product delivers is a crucial means of differentiation. It’s also critical to effective ‘productisation‘ — the process of turning your technology into a successful product.

The Axis of Value

In the mind’s eye of the user, value is distinct from price. The ‘axis of value’ that exists between a company’s product and what customers pay for is delicate and complex. Done right, monetisation acts as a force for good — driving the product team to deliver more and more value. Done wrong, it becomes a malevolent tractor beam; obliging them to work against it.

A recent case in point is Evan William’s decision to pivot Medium away from ad-supported monetisation to ‘something else’, as yet undefined. The ad-driven revenue model, he concluded, is ‘broken’ from a product perspective. Instead of monetisation being aligned with the product’s value, one works to subvert the other. Monetising eyeballs encourages content creators to publish shallow clickbait, rather than quality editorial. 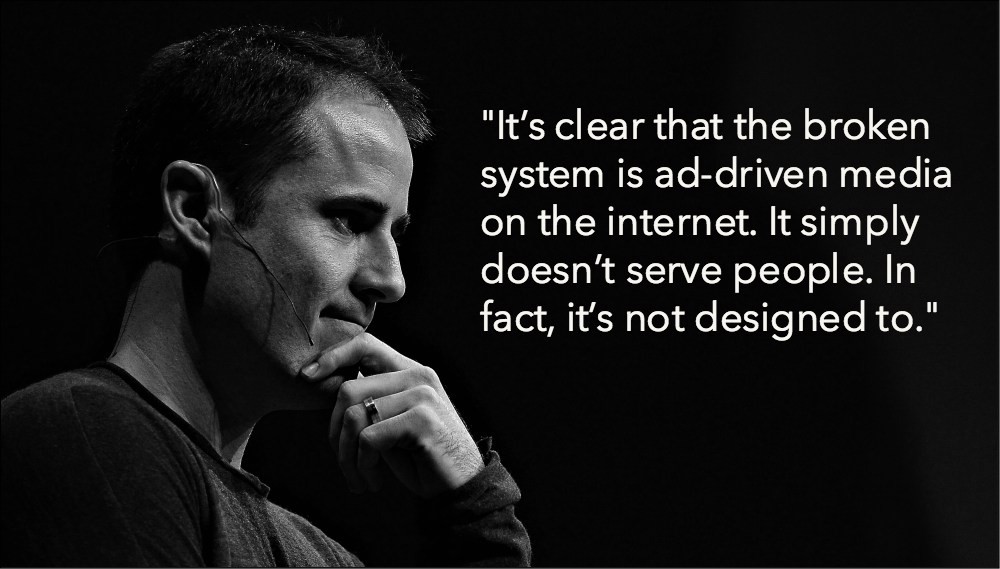 Writing on media revenue models in The Information, Jessica Lessin observed that advertising is the reason,

The Elements of Value

What tools can product leaders draw on to better articulate the value their products deliver?

A number of options exist, from Alan Klement’s ‘Job Story‘ to Alex Osterwalder’s ‘Value Proposition Canvas.’ Generating the most interest right now is Bain’s Eric Almquist. After extensive research, he and his team identified 30 ‘Elements of Value‘ a product (or service) can deliver. Extending Maslow’s Hierarchy of Needs, Almquist’s team conceived a ‘Pyramid of Value‘ that stacks elements into four layers: functional, emotional, life changing and social impact.

Base heavy, like any pyramid, elements congregate further down the stack. Fourteen occur within the functional slice alone, whilst a single element (self-transcendence) resides at the peak. 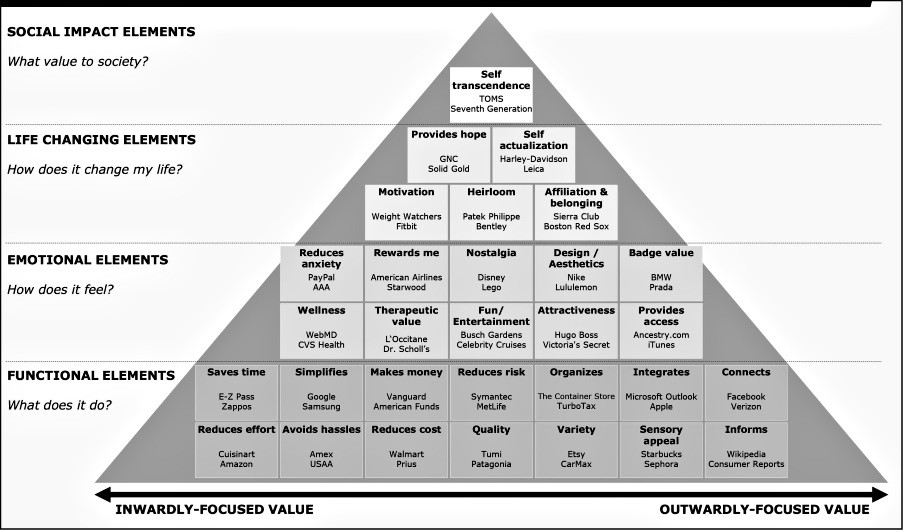 The more elements of value you can deliver the greater your revenue growth and customer advocacy. Almquist is keen to point out that trying to compete on all elements would be prohibitively expensive, even for the most affluent brands. Success, he concludes, is the result of carefully defining which elements of value your product competes on and ignoring the rest. Even Apple only differentiates on 11 elements. On the remainder, it is no different from anyone else.

Note that most products (in fact, most startups) tend to compete solely within the functional layer. They save time, money or inconvenience for their users. Not that there’s anything wrong with that. Uber is doing just fine nailing those three. But opportunity and blue-er oceans are being overlooked further up the stack.

Instead of thinking about features, screens or technologies, founders and product leaders should begin by carefully identifying the value their product will deliver and the outcomes it will help their customers achieve. Eliminating pain is a fine starting point but a highly competitive place to remain in. By competing further up the Value Pyramid, products can align themselves with the emotional and social aspirations of their users. This helps avoid the commodity trap and establishes much greater loyalty long term.

Originally published at pivot.uk.com on February 5, 2017.