For context, I need to explain the original purpose of the Facebook group I ran this growth experiment on. Elegantly titled Shitposting in Asia Ironically™, or SIAI for short, was a group aimed at expats living in Asia. Its sole purpose was to share memes about the absurd elements of living in Asia. For those out of the loop, Urban Dictionary defines shitpost as a verb meaning “to make utterly worthless and inane posts on an internet message board”. Sometimes I don’t agree with Urban Dictionary, but in this case I do.

As far as content goes, SIAI contained the kind of stuff you’d miss out on as a tourist. My group had less restrictions than the typical regional expat group. People could share more controversial news articles and memes.

SIAI originally started as a means for me to manage UGC (user generated content) for a meme page I started a few years ago, Living in Asia Ironically (LIAI). Facebook hasn’t updated its Page inbox management features in a very long time. If fans send in pictures for me to post, it’s a pain. I’d have to open up a message, click the photo, then click download.

My solution was to create a Facebook Group to handle UGC. Groups can easily be scraped using free solutions, but there aren’t many options for a Page’s Inbox. Thus, SIAI was born.

Members of this group were highly engaged. Many have said that posts from the group dominate their newsfeed. This leads to even more engagement and growth. Before embarking on the 3 day experiment, I started with 8887 group members and ended it with 10,318. My flaw in calculating the 923% growth rate is that I hadn’t taken good notes on average growth beforehand. Facebook doesn’t provide analytics for Groups like it does for Pages so I was out of luck there.

From memory, I recall gaining a bare minimum of 10 in a day and up to 50 when things were really picking up. To be more modest with my growth rate, I took the +50 stat. My true growth rate could very well be much higher than 923%.

What was my strategy for unlocking Facebook Group member growth?

There are 2 sides to this story and both involved quite a bit of teamwork. I couldn’t have done it alone, but I also didn’t have to spend a single dollar. Side A was rebranding the group to appeal to a much larger audience. Side B was using a combination of free tactics to take full advantage of the rebrand. Shitposting in Asia Ironically™ was no more. Say hello to Living in Asia™!

For the record, these aren’t trademarked names. Adding “™” to a shitposting group’s name is a meme in and of itself. Popular examples are Simpsons Shitposting™ and Twin Peaks LogPosting™.

Leveraging Super Fans to Help with Rebranding to Living in Asia™

You only need 1,000 true fans to succeed. Kevin Kelly is famous for coming up with this concept. The theory goes like this: You will make much more money off the first 1,000 fans than anything you gain after. Kevin calls them true fans, but I call them super fans because they truly empower any brand you’re trying to build.

To start off the growth experiment, I made a post in SIAI. It explained what I was trying to achieve and asked for help from fans. This was a crucial element in the growth hack’s success. Without my group of Super Fans helping me out, it would have surely failed.

Living in Asia™ was meant to appeal to a much larger audience of people in Asia. Not just expats. Not just meme connoisseurs. My sights were set on expats in Asia, backpackers, travel groups and even regional business communities. With close to over 9,000 fans before the experiment, there was no hope of getting everyone in on my plans.

I created a Facebook Messenger group chat for the super fans. It kept them up with the planning and execution phases of the Facebook Group growth hack. To brand with the new group identity, I got them to flood the Living in Asia™. These posts reflected the re-brand and drowned out the usual feed of memes, insider jokes and news articles. 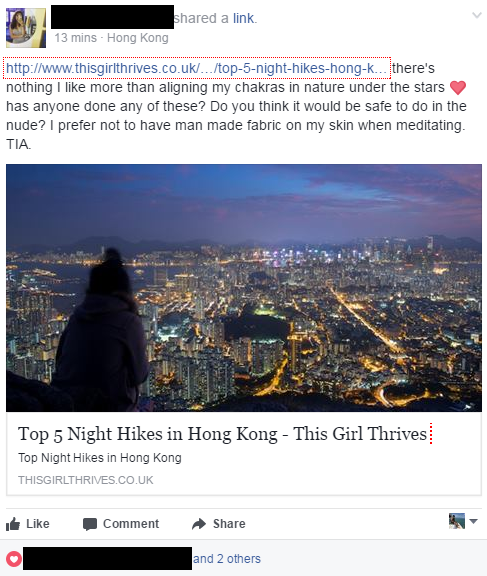 On top of this, I promoted a few of my Super Fans to become mods of the group. This way, I wouldn’t have to handle accepting new requests to join the group. They could also delete anyone spamming their blog immediately after joining.

Our group chat was around 25 members strong and a force to be reckoned with. At any point in those 3 days I felt the new members would be put off by the regular shitposting, all it took was me messaging the group chat. They shared mundane news from around Asia, asked for travel tips and more. Leading by example, I showed them exactly how it was meant to be done. 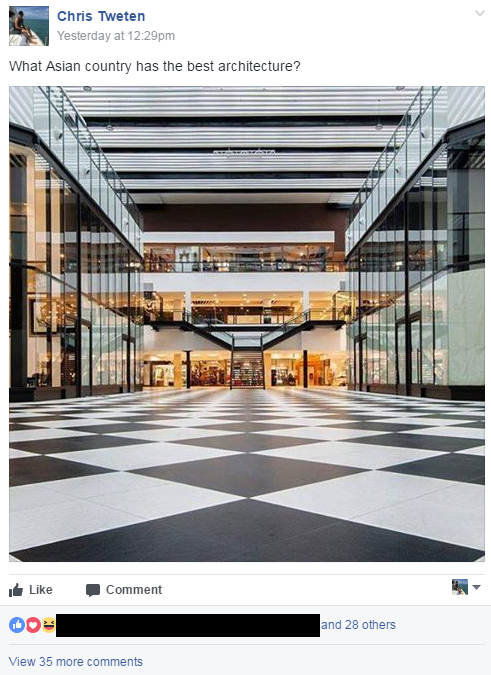 Rebranding with Strong Copywriting and Graphics

Cover Photo: SIAI’s old cover photo was a terrible bad translation from a restaurant I went to in Shanghai. That needed to go. I changed it to a photo of a beachview villa on Koh Samui. It was classy, but not obnoxious like some travel groups can be.

Pinned Post: The old pinned post was merely the group description which contained our posting guidelines. It was boring. I made a new one that appealed to backpackers and expats of Asia. It welcomed them into the group and encouraged introduction posts. Did I say strong copywriting earlier? I meant strategic. I showed my new Pinned Post to the STB team. Steffen jokingly told me to change “the most quickly growing Facebook community” to “the most quickening growing Facebook community”. My initial thoughts were, “Fuck it.” I changed it to most quickening and no one bat an eye. 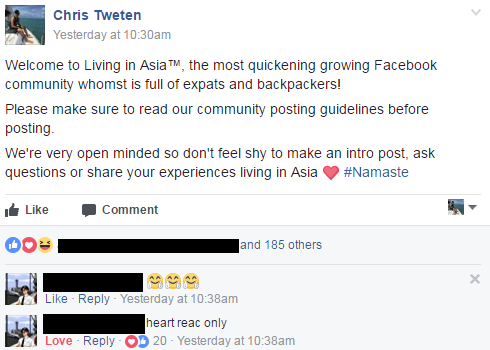 Welcome to New Members Post: This isn’t a normal part of rebranding strategy of a community. Facebook doesn’t allow more than one Pinned Post. Making new members feel welcome and introduce themselves was key to boosting engagement. We had massive amounts of requests to join. My notifications were on swerve. If I didn’t have time to comment, I’d message the Super Fan group and get one of them to bump the thread. 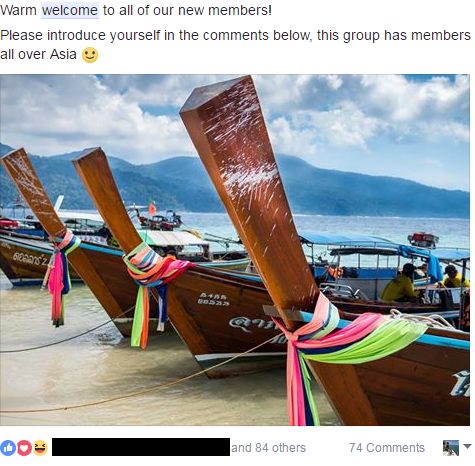 How exactly did I increase growth rate so rapidly?

Facebook Group Promotion: Put simply, promotion of my group in other Facebook groups. You have to be very careful when sharing a link to your own group in other groups though. In many cases, it’s flat out against their posting guidelines and you’ll get banned.

I was already a member in dozens of Asia-specific groups, so getting this done didn’t take much time at all. If you aren’t a member of many groups specific to your niche, you’ll have to seek them out beforehand. Sometimes it takes days for an admin to accept your request to join a group.

My way of getting around this was writing a very polite introduction to Living in Asia™ with a note at the end to the moderators of the group. If they weren’t cool with my self-promotion, they should just delete the post and there’d be no hard feelings. Simple.

Pinned Posts: If a group admin liked what I was doing, I’d ask them to pin the post. Surprisingly, many were completely cool with this. I attribute a huge part of this growth hack’s success to this. 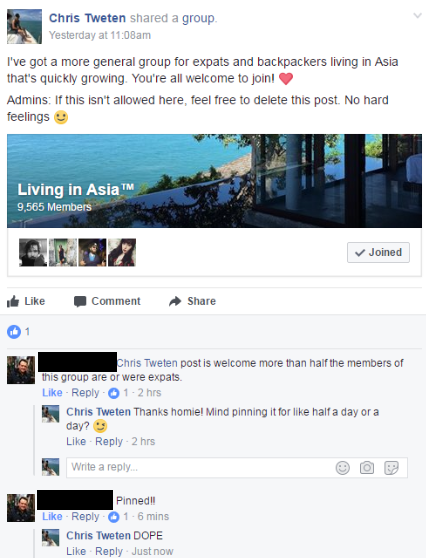 CTA Buttons on High Traffic Blog Articles: Alongside LIAI, we started a website where we published our own views on Asian news. LivingInAsiaIronically.com launched in March 2017, but its traffic growth has consistently impressed me. Some of our low-effort articles were reaching 10K views. Organic traffic followed as we gained a handful of powerful backlinks. Our usual CTA buttons lead towards the LIAI Facebook Page, but for the sake of this growth experiment, we changed them to lead to Living in Asia™. It wasn’t anything major, but it every small tactic adds up.

To summarize my overall strategy to increase member growth rate of this Facebook Group by 923%:

Rebrand to appeal to a larger audience. Create a group chat of Super Fans who will help out (for free). Appoint Super Fans moderator status to handle invite requests and spam. Mass promote in larger Facebook groups in related niches. Get your promo posts pinned in other groups. Update CTAs on high traffic blog articles for member signups

The Takeaway: I strongly believe this growth hack will work for any niche, but under certain conditions. Firstly, you need to have an existing audience that’s highly engaged. Second, you need to be a member of large Facebook groups with similar target audiences. Lastly, you need Super Fans that will follow your orders like a cult leader.