Cookies & Privacy
We do not track or sell your personal data. We use a minimal amount of cookies in order to provide the best experience for you. By using this website you agree with our terms of use
#Marketing #UX / UI #Product Development

Getting Your Product Into the Habit Zone

The Internet has become a giant hairball of choice-inhibiting noise and the need to make sense of it all has never been more acute.

Just ask high-flying sites like Pinterest, Reddit, and Tumblr. These curated web portals connect millions of people to information they never knew they were looking for.

Some have started monetizing this tremendous flow of traffic and though it’s too early to call winners and losers, their strategy of driving user engagement by creating daily habits is clear. These companies are following a plan implemented by web titans like Amazon and Google and are hoping to yield similar results.

Creating user habits leverages two critical factors that should be considered by every company attempting to build high-engagement products.

Habits are one of the ways the brain learns complex behaviors. In order to allow us to focus our attention on obtaining new insights, neuroscientists believe habitual behaviors are moved to the basal ganglia, an area of the brain associated with actions requiring little or no cognition.

Habits form when the brain takes a shortcut and stops actively deliberating about the decision being made.

The brain quickly learns to codify behaviors that provide a solution to whatever problem it encounters. For example, nail biting is a common behavior, which occurs with little or no thought, typically triggered by the unpleasant feeling of stress.

The biter associates the satisfaction of nail chomping with the temporary relief it provides. As any habitual nail bitter knows, the conditioned response is extremely difficult to break.

Like nail biting, many of the decisions we make in our daily lives are made simply because that’s the way we’ve found satisfaction in the past. The brain automatically deduces that if the decision was a good one yesterday, then it’s a safe bet again today.

In a recent study at the University College London, researchers followed participants as they attempted to form a habit of flossing their teeth. As one of its findings, the study concluded that the more frequently the new behavior occurred, the stronger the habit. Like flossing, frequent engagement with a web site or app increases the likelihood of forming new habits.

Google search provides an example of a service built upon a frequent behavior creating users habits. If you’re skeptical that Google is habit-forming, just try using Bing. In a head-to-head comparison of the efficacy of an incognito search, the products are nearly identical.

Even if the geniuses at Google have in fact perfected a faster algorithm, the time saved is imperceptible to everyone but robots and Mister Spock. Milliseconds matter, but they don’t hook users.

Instead, habits are what keep users loyal. If a user is familiar with the Google interface, switching to Bing requires cognitive effort. Though many aspects or Bing are identical to Google, even a slight change in pixel placement forces the would-be convert to learn something new. Adapting to the differences in the Bing interface is what actually slows the user down and makes Bing feel inferior.

Internet searches occur so frequently that Google is able to cement its tool as the one and only solution in the habitual users’ mind. Users no longer need to think about whether or not to use Google, they just do.

Furthermore, whenever the company can identify the user, it improves search results based on past behaviors. The more the product is used, the better the algorithm gets and thus, the more it is used. The result is a virtuous cycle of habit-driven behavior resulting in total market domination.

But sometimes a behavior does not occur as frequently as flossing or Googling, and yet becomes a habit. For an infrequent action to become a habit, the user must perceive a high degree of utility, either from gaining pleasure or avoiding pain.

Take Amazon as an example; the e-tailer has its sights set on becoming the world’s one-stop shop. Amazon is so confident in its ability to form user habits that it runs ads for directly competitive products on its site.

Customers often see the item they are about to buy listed at a cheaper price and regularly click away to transact elsewhere. To some, this sounds like a formula for financial suicide. But to Amazon, it’s a shrewd business strategy.

Not only does Amazon make money from the ads it runs from competing businesses, but it also utilizes other people’s marketing dollars to form a habit in the shopper’s mind.

Amazon seeks to become the solution to a frequently occurring pain point: the customer’s needs to find the item they’re looking for at the best possible price. By addressing the shopper’s price concerns, Amazon earns loyalty even if it doesn’t make the sale.

The tactic is backed by a 2003 study by Trifts and Hubl, which demonstrated that consumer’s preference for an online retailer increases when they are offered competitive price information.

The technique has also been used by Progressive to drive over $15 billion of annual insurance sales, up from just $3.4 billion before the tactic was implemented.

By allowing users to comparison shop from within the site, Amazon provides tremendous perceived utility to its customers. Though shopping on Amazon may not occur as frequently as searching on Google, the company solidifies its place as the default solution to customers’ purchasing needs with each successful transaction. 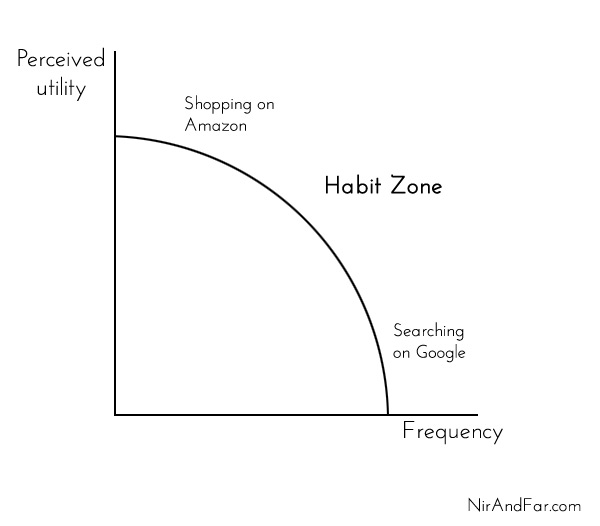 Companies can begin to determine their product’s potential for creating user habits by plotting two factors: frequency (how often the behavior occurs) and perceived utility (how rewarding the behavior is in the eyes of the user). “The Habit Zone,” as I call it, is where an action occurs with enough frequency and perceived utility for it to become the default behavior.

Established companies like Google and Amazon, along with new entrants like Pinterest and Reddit, succeed by creating user habits. They help people find what they are looking for amid the ever-increasing online clutter. In return, users reward them with engagement and loyalty, turning to them as their go-to solutions in their respective categories.

When a habit is formed, the script for what to do next is written, making the behavior more likely to occur in the future. These companies leverage habits to earn their places in users’ lives and minds

Thanks to Max Ogles and Jess Bachman for reading previous versions of this article.

Disclosure: I own shares of Amazon.com, Inc.

Getting Your Product Into the Habit Zone
Oct 29, 2018
Nir Eyal

Getting Your Product Into the Habit Zone
Oct 29, 2018
Nir Eyal